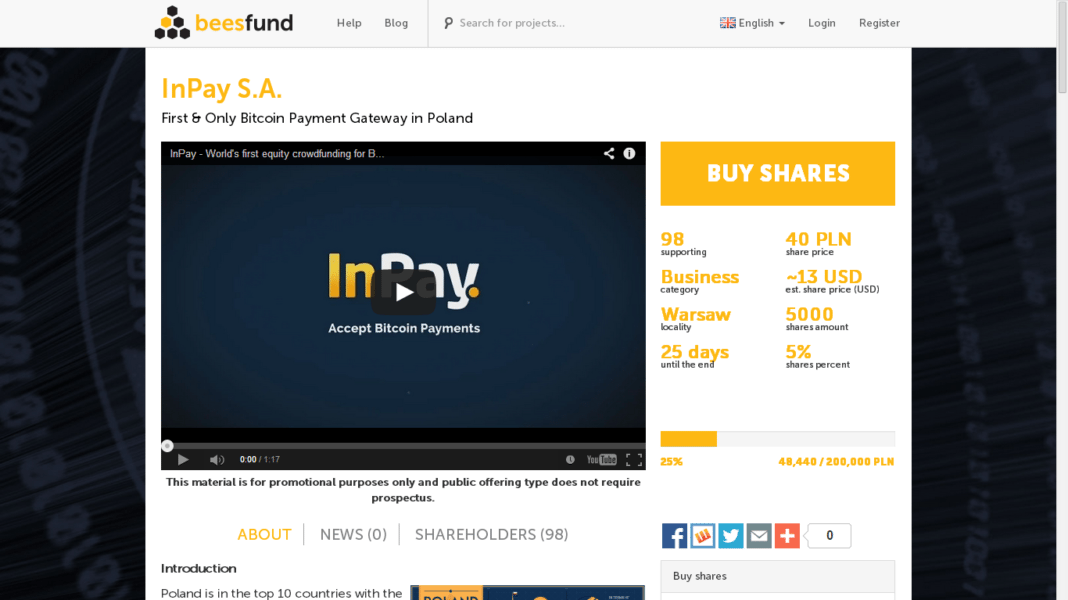 InPay S.A. has become the first stock company in the world whose registered shares can be purchased for Bitcoins. The stocks are available at Beesfund.com – the world?s first Bitcoin – oriented crowdfunding platform originating in Poland. It is worth noting, that Beesfund?s technical end is administered by non other than InPay S.A. itself.

InPay is Poland?s equivalent for Bitpay. Will the company manage to win a market share for itself? That is a possibility since its older sibling from across the ocean, over three years, saw its customer base expand to more than 4,000 entrepreneurs in 33 countries, and it now includes the likes of WordPress, Virgin Galactic, Gyft, Shopify, and-recently, also PayPal.

It appears well-founded to question whether InPay altogether stands a chance against BitPay as its competitor, the latter being a 30-million-dollar globally recognized brand. InPay?s promotional movie claims that it can in fact happen.

How did the InPay-Beesfund cooperation come about?

Beesfund contacted us with a request for aid in introducing Bitcoin payments into their crowdfunding platform. After a time they proposed that we ourselves appear on there as buyable stocks. We?ve agreed to the notion for a few reasons. First of all, nobody in the world has ever made possible the selling of actual stocks for digital currency. The pioneering factor, we believe, will play to our advantage. We wish for Poland to be present in the world as a hub for innovative solutions.

Where from did you derive capital for the hitherto company expansion?

Initially we invested our own funds and time. When it became evident, that outside legal support was necessary, there came a need for an angel investor. We weighed several options but ultimately we entered into a partnership with Arkadiusz Osiak- the founder of money.pl, who not only offered to us his capital, but also became an active executive board member at the company. We have benefited a great deal from his experience in business and mentoring capacity. With Arek?s support we were able to put together a joint-stock company.

What qualities do best speak to your credibility?

We won the startup contest held by T-Mobile and Polska Przedsiebiorcza, we enjoy the support of aforementioned Arkadiusz Osiak- founder of money.pl, and we have a history of realizing projects for large companies, as well. I personally am involved in Poland?s Bitcoin scene and on a mission to popularize this mode of payment in the country. This has resulted in my numerous public appearances at conferences on Bitcoin. It is my believe that folks associated with Bitcoin in Poland are likewise familiar with me.

What are your thougts on BitPay? Do you think you?ll be able to realistically compete with it?

So long as the Polish approach to foreign providers remains unchanged, companies like BitPay will have a hard time compelling stores to cooperate. Besides, Poland requires tons of work at base level toward stores actually accepting this form of payment which. This means time, talks and an individualized approach are needed.

What benefits or risks are associated with the purchase of stocks?

Stock holders are issued securities for the registered stocks. They are mailed out to every stock holder. These possess collectible value and can be sold as property. It is a high-risk long-term investment but we will do everything in our power to not betray the trust placed in us and also dispense discounted services and other benefits exclusively to stock holders.

Compared to a number of investments covered by the http://www.coindesk.com/bitcoin-venture-capital/ report, our crowdfunding effort is symbolic in tone. That does not however change the fact that the funds gathered will enable us accelerate software development and advance our sales.

How do you envision Bitcoin?s future?

I am not worried about the development of the technology itself since hundreds of outstanding developers and scientists are at work perfecting it. What concerns me is the fast approaching period of increasingly bothersome regulations being put in place. These regulations could considerably postpone by many years the adoption of digital currency and the growth of companies based on it. This will however spur the growth of technology similar to DAC (Decentralized Automatic Corporations). We will concentrate on providing services relying on complete decentralization. As of this moment, DACs are capable of assigning work such as programming software to individuals. What I mean by that is, for example, a request to programmers to come up with means allowing a DAC to unilaterally relocate to a different class of servers or to perform any other task that a DAC at a given time cannot execute on its own.

Such systems could commission writing articles or assemble them automatically as mashups of existing content and, for example, earn money on ads provided by outside advertising networks which monetize their funds in digital currency. DACs are capable of evolving both through modifications to the code, as well as, on new programmer-developed plug-ins. Evolution could also take place along the lines of the phenotype itself, whereby a network creates thousands of websites in order to select the most profitable and likable version of itself. These are just some very simple examples but they illustrate that in this day and age we are already capable of creating entities without a definite ?owner?.

I speak on this for two reasons. First, to demonstrate that technology will with increased effectiveness evade ?censorship?, and second, to point out that Bitcoin does in fact open up to us a whole ?Internet of Things?. Now they are enabled to conduct transactions among themselves on their own accord and without technical obstacles. Combined with 3D printers and drones this could actually spell a whole new industrial revolution.

Would you care to answer the questions asked in the comment section?

Sure, all questions welcome. 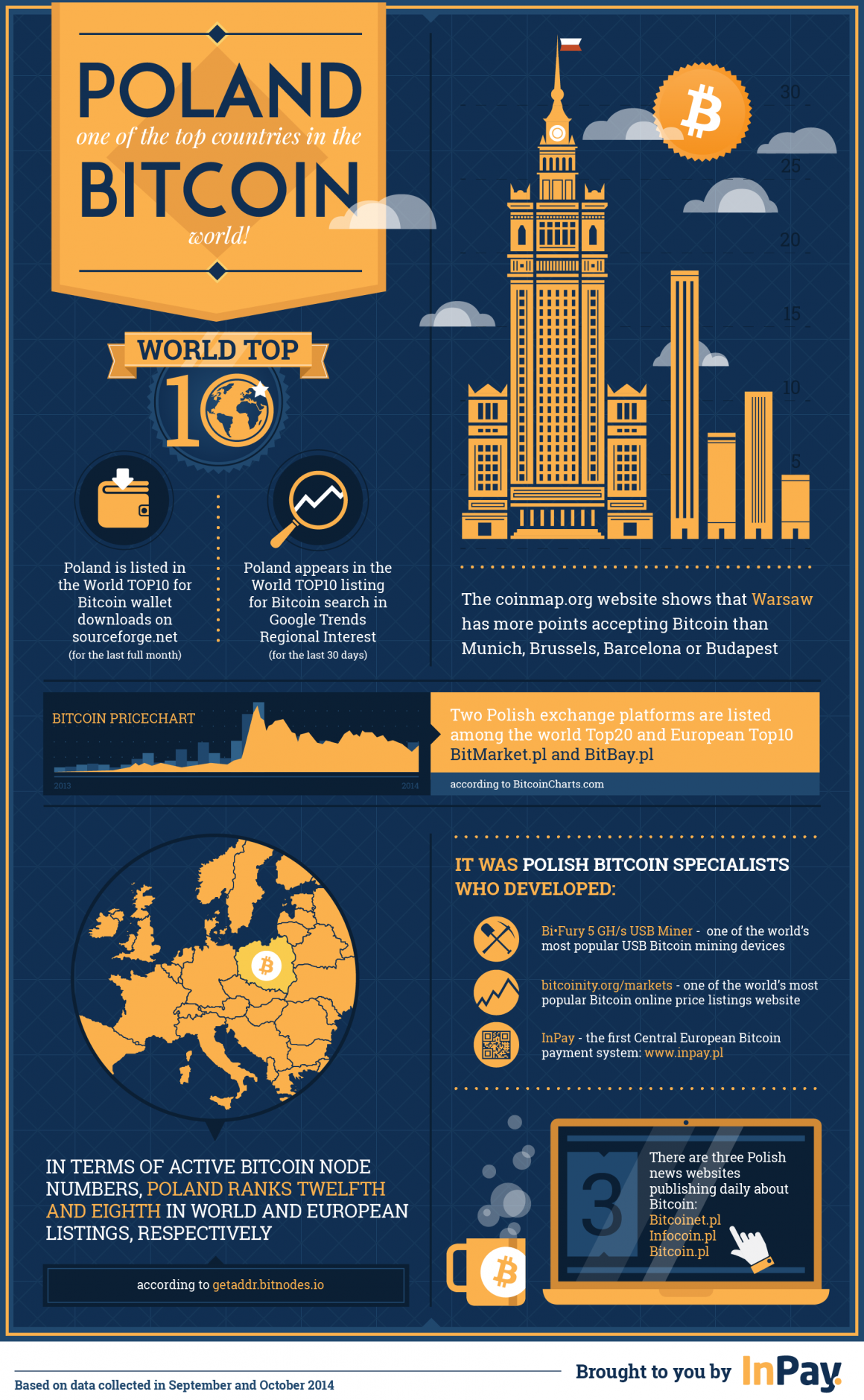