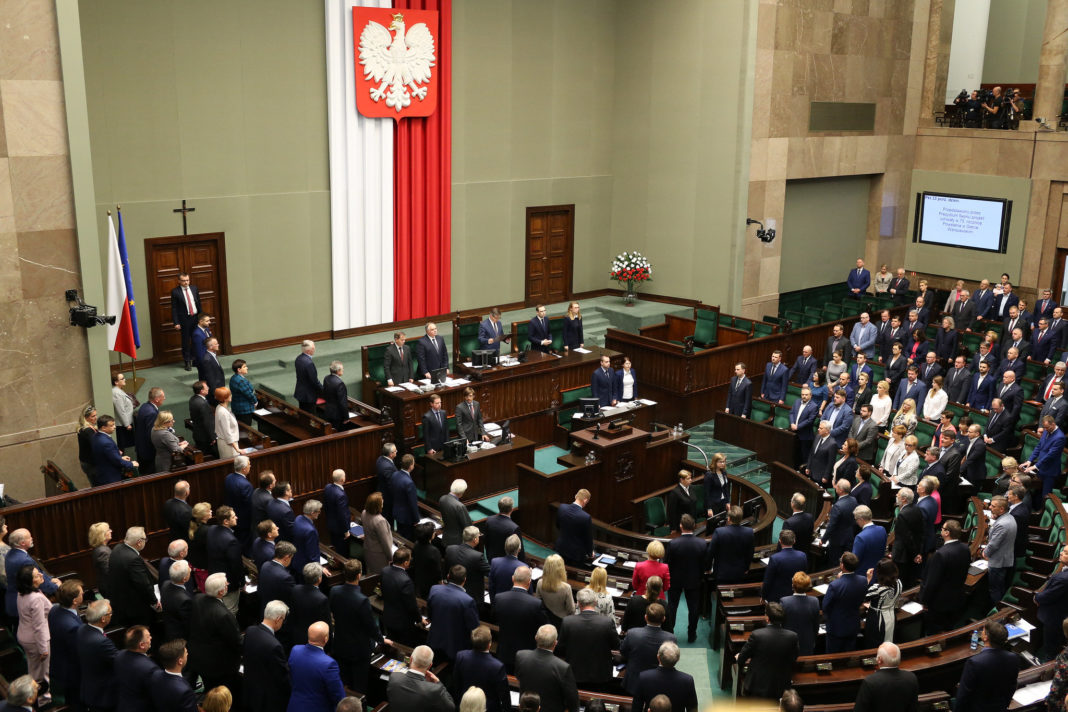 The revolution marches on. Today it is time to ask Polish politicians about their view of cryptocurrency.

Politicians in Poland have not so far seemed particularly eager to support cryptocurrency or blockchain but there is some reason for optimism. The September of 2016 saw Poland’s first public meeting on the subject take place at the Polish Sejm. Organized by the Polish Bitcoin Association, the meeting’s objective was to familiarize the politicians with the intricacies of the crypto world and close on its heels came the “Blockchain/DLT Stream And Cryptocurrency” project supervised by the Ministry Of Digital Affairs then headed by Anna Streżyńska. In the meantime inquiries were made by MPs to the Polish Bitcoin Association about the blocks network and cryptocurrency in general. As a result, what is the politicians’ view of cryptocurrency as things stand now? We decided to find out.

The Polish Right is united alright. But what about crytpocurrency?

It’s now our turn to inquire and we first turned to the ruling coalition. One positive sign came from Robert Anacki – deputy chairman of the “Alliance” (Porozumienie) party:

We believe that distributed ledgers, including the blockchain technology, will usher in a revolution in public administration – says Anacki

Cryptocurrency is the best-known area where this technology is used and, as a country, it is incumbent upon us to make startups and capital flow and stay in Poland. As new as it is, cryptocurrency is often met with misunderstanding and distrust among many politicians. “Alliance” is ready to offer any support needed to streamline the legislative process in regards to the matter guaranteeing that investors and taxpayers alike can enjoy a sense of safety and stability.

That statement is bound to fill the hearts of Bitcoin proponents with hope. “Alliance” shares the coalition with “Law and Justice” (Prawo i Sprawiedliwosc), however, and the latter enjoys a lot more say on the subject. We therefore delighted with our second question a politician from that dominant ruling party – one familiar with the topic: Wojciech Murdzek

Regulation of the cryptocurrency market is necessary because of the country’s interests –remarks Murdzek whose philosophy is not much different from “Alliance’s.”

It is essential that cryptocurrency-oriented businesses remain in Poland rather than move abroad.

It grieves me to see the chaos we observe in the market nowadays. I do at the same time believe that the actions by the Finance Ministry bode well for a sensitive regulatory scheme for this new and innovative sector of our economy. When coming up with such a scheme we must not forget about the specter of tax evasion. I trust that such sensible regulation as I talk about will compel individuals to operate lawfully.

Is the united Polish Right friendly to cryptocurrency? All we can do is hope that the aforementioned efforts by the Finance Ministry will indeed result in the kind of positive change politicians like to promise various folks. What awaits next year, however, when the levers of power might change hands?

The next parliamentary elections take place next Fall. What kind of developments might result from electoral changes? Ask any “Civic Platform” (Platforma Obywatelska) politician and they’ll assure you that whatever change takes place, it will be positive change. Our conversation with Joanna Augustynowska was centered, however, around cryptocurrency regulation rather than her party’s political future.  We were lucky to speak to a person who’s familiar with legal decisions in regards to cryptocurrency around the globe and has a good level of comprehension on the matter.

Blockchain is a technology of the future and growing in popularity worldwide. Experience tells us that these kinds of technologies rapidly enter into common use across society. Think about cell phones 30 years ago when they were only used by the military. As recently as the mid 1990s they were as big as a suitcase but today everybody carries around in their pocket a supercomputer which markedly makes our lives easier.

Poland needs a new impetus to facilitate a friendly legal environment for the blockchain technology. Our model ought to be something like what they did in Germany or Japan where the technology has plenty of room for unimpeded growth.

It appears as though “Civic Platform” might very well enter into a coalition with “Modern” next election. An official statement by said party was given to us by Paweł Pudłowski of “Modern” (Nowoczesna)

“Modern” opposes excessive bureaucracy and any new taxes. Consequently, the statement by the Ministry of Finance known as  “Taxing Cryptocurrency Trades – PIT, VAT And PCC (“Skutki podatkowe obrotu kryptowalutami w PIT, VAT i PCC”) is considered an absurdity by our party.

The potential burden of having to file a PCC declaration for every transaction – often numbering in the hundreds or thousands – is not only far removed from the realities of the cryptocurrency sector but also grossly harmful to investors and, very likely, a death sentence for the industry. We expect the government to reverse course.

At the same time we advise caution when investing in cryptocurrency. The risky nature of this enterprise should be portrayed as such by governmental institutions and a statement on the topic issued by the Financial Supervision Authority (KNF).

There should be no interference by the government in the private investment decisions of citizens as long as the legality of an operation is undisputed. If investors wish to consciously invest in high risk endeavors, we believe they should have that right.

As a result we urge the government to, in a timely fashion, remedy the uncertainty having to do with the tax regimen for cryptocurrency.

What emerges is a uniform view by each party that the cryptocurrency market represents an new and important sector of the economy. All we ask for now are policy specifics.

The Polish Right On Bitcoin: Yes

Delving deeper into post-election machinations and alliances we find that commentators point to “Kukiz ‘15” as a potential key ally of “Law and Justice” which could help the now dominant party hold on to power. It was fitting that we ask a representative of that party a question as well. Despite Tomasz Jaskóła being on leave, we managed to obtain a commentary on his opinion from employees at his office.

“Mr. Jaskóła opposes the prohibition and excessive taxation of proceeds from cryptocurrency trading. The latest ideas on taxation by the Finance Ministry would do nothing but destroy the businesses of young people who depend on them for their sustenance. On April 12th, 2018 Mr. Jaskóła attended a Sejm Cryptocurrency Committee meeting. The committee will look closely at the steps the government takes on cryptocurrency regulations and will offer its insight when necessary. We wish that whatever comes out of the government is not excessively burdensome and Mr. Jaskóła will be an active member of the aforementioned committee.”

The Left is left divided.

Finally we come to the the perspective of the left in Poland. Largely shoved aside by voters in recent elections, it still stands a chance of introducing a few of its members into Sejm this coming election season.

One of them is “Razem” characterized by an unorthodox way of handling politics. There is no designated leader if you were to listen to its representatives and their answers on cryptocurrency are as follows:

”Razem” does not have any crystallized views on cryptocurrency. For an official statement to come together, government institutions dealing with digital affairs would have to first issue their own statement and a vote would have to be held within the party whether to endorse or reject it – same as in the case of Internet-based elections.

Nonetheless, I will say that we are a party reliant on facts in its political activities. As it regards cryptocurrency the facts are as follows: the proof of work infrastructure causes mining to consume a lot of energy which in the era of Climate Change, already a problem around the world, amounts to a flagrant display of short-sightedness”

There are other fundamental aspects of cryptocurrency which will be seen as problematic by a left-wing party such as its deflationary nature, high transaction costs and the substitution of democratically controlled regulatory structures by software-based systems.

Keep in mind, that a neoliberal economy entails cost when it comes to software security and there is no such thing as perfectly safe software and therefore there will be more and more cases of bugs and vulnerabilities in smart contracts.

Future generations will benefit much more from financial bubbles being inflated through trading tulip bulbs rather than energy inefficient computations producing greenhouse gases.

I will add that we have blockchain enthusiasts within our party and the discussion is still on. Nonetheless, while blockchain might turn out to be a useful technology, deflationary cryptocurrencies based on proof of work are unlikely to do so.

This brings us to the close of our account of our talks with politicians. Some parties did not offer answers to our questions. What emerges from the above statements, however, is the fact that blockchain and cryptocurrency are becoming a part of our reality – even within the halls of power. Perhaps the revolution we’re waiting for is closer than a lot of us would expect. Let us hope that the right statements become policy and the parties vying for Polish citizens’ votes will keep their word on cryptocurrency.